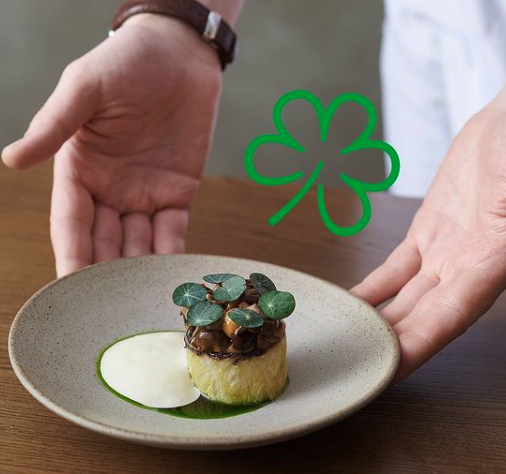 A closer look at sustainability practices in the kitchens of the two 2021 Michelin Green Star awardees in Hong Kong and Macau.

Some say the future of food is sustainability and, as one of the world’s key players on the FnB scene, the iconic Michelin Guide is paving the way to a more sustainable industry with introducing a new accolade: the Michelin Green Star.

A new distinction first launched in France in 2020, the Michelin Green Star recognizes chefs who hold themselves accountable for both their ethical and environmental standards in everything that they do, be it adopting a certain work ethic, shifting for ingredients that are local and seasonal, and therefore more sustainable, maintaining fair supply chain relationships, fighting food waste and more. Announced on January 27, the 2021 Michelin Guide Hong Kong Macau’s selection saw the debuts of this new accolade in the region with two restaurants being awarded with a Green Star: Roganic in Hong Kong and IFT Educational Restaurant in Macau.

A crowd pleaser and the first international outpost of British chef Simon Rogan’s awarded London restaurant, Roganic Hong Kong first opened its doors in 2019 and quickly became a diners’ favourite with it’s city-centric take-on farm to table approach. Awarded in 2020 with its first star, just a few month after its opening, the restaurant is this year priding itself on not just retaining its star but also being the first ever Hong Kong restaurant to be awarded the Michelin Green Star. “We are truly grateful to be one of the earliest recipients of the MICHELIN Green Star award. As Hong  Kong is not the easiest city to be sustainable, our Hong Kong team has worked hard to promote food  sustainability in new, exciting, and locally relevant ways, and have set an excellent example within the  industry,” says Simon Rogan, chef-founder of Roganic. But what does it really take to be at the forefront of sustainable gastronomy practices? From the very first day of opening, Roganic Hong Kong has shown a dedication towards reducing carbon footprint, championing local foraging with partnering with Hong Kong New Territories’ farms such as Wah Kee Farm or New Age Organics and implementing an in-house herb and microgreen garden, using the latest technology from Evergro, to grow garnishes to be used by the kitchen and bar teams. With plastic such a hot topic those days, you wouldn’t be surprise to hear plastic consumption is one of the first issue the restaurant decided to address with using Nordaq’s filtered water to eliminate plastic bottles but also with working hand in hand with suppliers to ensure packaging choices are as eco-friendly as possible.

When launching “Simon Rogan at home”, its takeaway service, mid-2020 the restaurant has opted for non-plastic and decomposable containers making it one of the eco-friendliest takeaway option on the Hong Kong market. Last but not least, the chef’s “Farm to Table” culinary philosophy itself plays a crucial role in the restaurant’s sustainable practices with the kitchen team being asked to use the entirety of each ingredient – be it an animal or mineral – to avoid food waste. A flavourful illustration of this philosophy is Roganic’s signature Three Yellow Chicken: breast, wing (stuffed with chicken leg meat) and skin are served to the guests as the main dish of the tasting menu while bones are reduced to a jus. Jus which is served alongside grilled corn pieces, corn being the main food given to free-range chicken, with the rest of the corn turned into corn puree and corn tart while the husks are grilled by the bar team a brewed into a corn tea.

Not your traditional restaurant, IFT Education Restaurant in Macau is part of the Institute for Tourism Studies meaning that the team, working under the guidance of a professional head chef, is made of students. With its important role in training the new generation and shaping the future of the culinary industry, IFT has made it a core value to deploy sustainable practices with actions such as conversion of food waste into fertilizer, growing herbs and greens to use in the kitchen and “reducing energy and resource consumption by using a diverse approach involving a solar energy system, paperless policy, and infra-red sensors for electrical appliances”.